The 2018 Catch Wrestling World Championship in Hamilton Township, New Jersey is just over 2 weeks away. It will see 8 men compete in an Openweight tournament for the first time to crown a recognised, unified champion in the modern era of Catch Wrestling.

The Snake Pit U.S.A. and Primal Promotions event takes place July 14th, so let’s take an early look at the competitors and the tournament bracket.

Little needs to be said about “The Warmaster” to those who have followed MMA closely over the last 20 years. Having fought professionally since 1997, Barnett has won titles in the UFC and Pancrase, and has been a finalist in both the Strikeforce Heavyweight Grand Prix and Pride Openweight Grand Prix.

Barnett is also the first and only Metamoris Heavyweight Submission Grappling world champion, a 2009 Heavyweight IBJJF No Gi Jiu Jitsu champion at Black Belt, and a 2010 Heavyweight Gracie Nationals Advanced No Gi champion.

Josh Barnett has been representing the ‘Violent Art’ of Catch Wrestling since his early days of MMA, having been coached by Matt Hume (Funaki < Fujiwara < Gotch lineage) and later Erik Paulson (Nakamura < Sayama < Gotch lineage). Barnett has also spent lengths of time learning from the late legends Billy Robinson and Karl Gotch in Japan. Robinson continued to be a mentor of Barnett when he moved to the United States of America.

A veteran of British grappling, Crossan is the founder of the UK based Legit Pro Wrestling promotion and its current heavyweight champion. A Black Belt in Brazilian Jiu Jitsu and Brown Belt in Judo, Crossan has hosted and attended Scientific Wrestling camps under the late Billy Robinson.

Crossan represented the UK in the Catch Wrestling Alliance (CWA) “USA Vs The World” event in 2014, and has taken part in Snake Pit International competition.

His most notable match to date was with the North American Catch Wrestling Association (NACWA) U.S. champion Luis Ojeda – the most prolific Catch Wrestling competitor of the last decade – which went to a time limit draw.

Crossan also runs the Legit Pro Wrestling school in Stockton and coaches in Newcastle and the North East of England. Crossan is a Combat Submission Wrestling (CSW) affiliate under Erik Paulson.

In 2006 Kenny Lester was ranked as the number #1 Heavyweight High School Wrestler in the USA, after winning the Walsh Jesuit Ironman tournament in Ohio. Lester was coached in High School by Wade Schalles and became the Junior National Champion for Oviedo High School, Florida and held the Florida state pin record with 114 pins.

Lester attended Arizona State University and Redshirted for the Sun Devils in 2006, where he went on to win the 120kg Greco-Roman title at the University Nationals in Akron in 2007. Lester also took second at at the FILA Junior World Team Trials, and fifth at the Senior U.S. Team Trials.

A Brown Belt in Brazillian Jiu Jitsu, Nicholas Caggia has competed in a variety of grappling and striking based martial arts for over two decades.Most notably he has competed in multiple North American Grappling Association (NAGA) events across increasing skill classes, which has netted him an impressive 51 championship medals and belts.

In 2014 Caggia won the Heavyweight division in the CWA “USA vs The World” Catch Wrestling event.Caggia has also recently begun competing in Judo and Sambo.

In Wrestling Ruiz is a Greco Roman Pan Am Silver medalist, 8 times Greco Roman and Freestyle All American and was an athlete at the U.S. Olympic training center from 2003-2006. Ruiz was also 4 years varsity and Letterman at Brigham Young University.

Ruiz has also attended a few of the Scientific Wrestling camps over the years under Billy Robinson and is familiar with the Catch style. Ruiz is perhaps the second favourite to win the Catch Wrestling World Championship tournament.

Perhaps the least known of the competitors, Zang has been Wrestling and Grappling for over 25 years. He was a region qualifier and AAU Junior Olympian from Pennsylvania. Zang has wrestled or grappled in over 1000 matches to date, and has not given up one point in NAGA competition in the last 2 years.

Zang is currently being trained by Snake Pit U.S.A. head coach Joel Bane, and replaces Amin Nazer from the UK who was originally scheduled to be a part of this tournament. Zang has to be thought of as the biggest underdog in this tournament.

Curran Jacobs was a member of the Michigan State Spartans wrestling team and competed in 2 NCAA tournaments, and went 1-2 and 3-2 respectively in 2010-11 and 2011-12. Jacobs fell one short of becoming an All American in his second NCAA tournament.

Jacobs did find greater success in smaller tournaments and duals, including the Big 10. In his Senior year he was ranked as high as No. 11 in his weight class by InterMat throughout the season.

Jacobs lettered all 4 years of High School at Owosso and achieved a 158-33 record, going 48-5 his junior year and 49-2 his senior year. He served as captain of his High School team, and became an All American when competing for Team Michigan Blue in Florida at a national tournament, achieving a 9-2 result.

Johnny Buck has over 15 years experience across Wrestling, Grappling and MMA. Buck was a 5 year Division I wrestler for The Citadel Military College, South Carolina between 2003-2008. Buck also wrestled in High School, and has achieved National Championship titles in Sambo, Greco Roman, Freestyle and Folkstyle.

Buck is a retired veteran of MMA with over 20 fights that included 2 fights in Bellator.

Buck is also a decorated Catch Wrestler having spent several years training under Coach Johnny Huskey and the late Billy Wicks. Buck is a 2x NACWA Catch Wrestling tournament champion for 2016 and 2017. 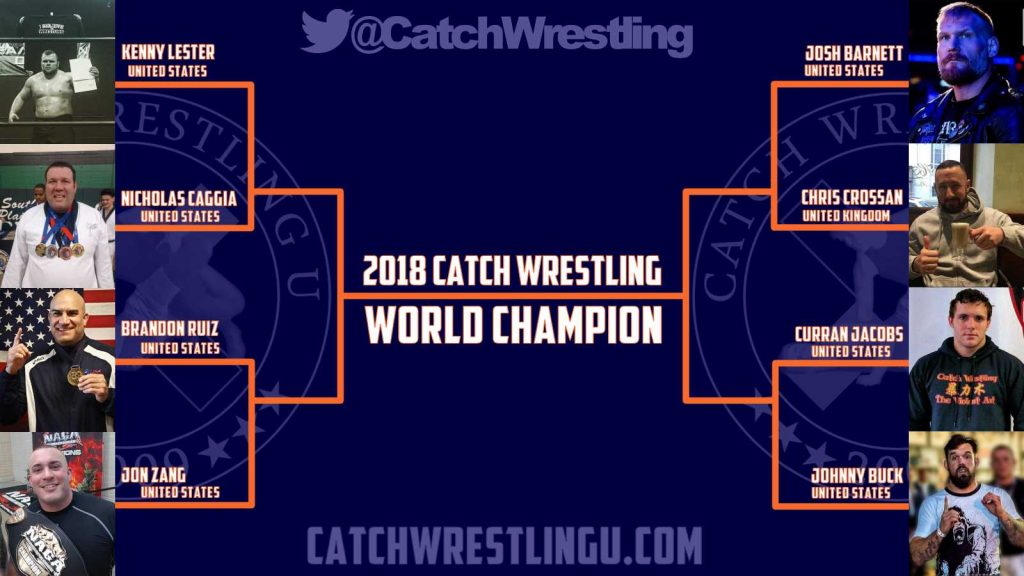 More event and ticket information on the 2018 Catch Wrestling World Championship can be found on the Snake Pit U.S.A. website.

Look for more 2018 #CWWC content in the coming days.

If you like what I do please support me on Ko-Fi.